Below is an example of a W2, obtained from the following website: http://blogs-images.forbes.com/kellyphillipserb/files/2014/02/W2.png 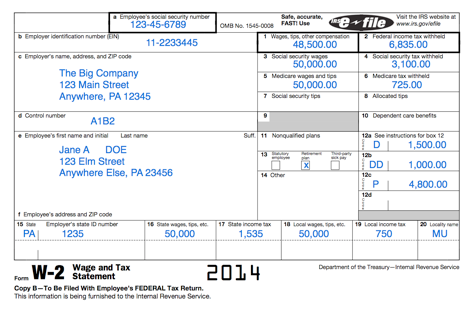 This taxpayer in question paid Federal withholding taxes of $6,835.00 which represents an average tax rate of 13.67% on $50,000 (ignore the $48,500 for the purpose of this exercise).How can anyone earning $50,000 object to paying an average tax rate of 13.67%? This is how Washington misleads us. There are at least three other tax payments that deserve scrutiny.There is the $1,535 payment for State taxes, which raises the average tax rate to 16.74%.Our taxpayer lives in Pennsylvania where there is an indirect tax of 6.0% payable in the form of a sales tax. Depending on local municipalities, the total tax rate can be as high as 8%.Assuming our taxpayer makes $15,000 worth of purchases that are subject to the 6.0% tax rate. She would be paying $900 in sales taxes. This would raise the average tax rate to 18.54%.We have only scratched the surface. Notice that our unfortunate taxpayer made a $3,100 contribution to Social Security and another $725 to Medicare for a total of $3,825, which translates into an average tax rate of 7.65%. This taxpayer’s employer also contributed $3,825 to the Social Security Administration on behalf of this employee. This money was earned by the taxpayer, but very few employees realize this fact.To be fair, we need to add the $3,825 to the $50,000 and that would give our taxpayer gross compensation of $53,825.Now, let’s calculate the average tax rate of our unfortunate taxpayer. First, we add the Federal taxes ($6,835), plus the State taxes ($1,535), plus the employee’s Social Security contribution ($3,825) and finally the employer’s Social Security contribution ($3,825). In total, these taxes amount to $16,020 for an average tax rate of 29.76% ($16,020/53,825). Excluding the State taxes lowers the average rate for Federal tax purposes to 26.91% ($14,485/53,825). One can’t avoid the sales taxes, which we calculated above at $900.Inclusive of State taxes and a reasonable estimate of sales taxes, this taxpayer is handing over 31.4% of her modest earnings of $53,825 to revenue collections bureaucrats at Federal and state level.  Excluding sales taxes and State taxes, the average Federal tax rate for this taxpayer is 29.7%.Those who argue that $7,650, or 14.21% (7,650/53,825; or 15.3% based on the $50,000 amount), of these taxes are being set aside for her retirement has to keep in mind that the website debtclock.org shows that the Social Security Administration’s unfunded liabilities pertaining to social security participants amount to $93.503 trillion (adding a million dollars every 35 seconds). In addition, the next time you get your Statement of Benefits from the Social Security Administration take note of this warning:

“Congress has made some changes to the law in the past and can do so at any time. The law governing benefit amounts may change because, by 2033, the payroll taxes collected will be enough to pay only about 77 percent of scheduled benefits.”

In plain English: Good luck if you think you are ever going to collect on these promised benefits.The employee’s Social Security taxes are subject to an open-ended contract, to be manipulated by politicians to suit their agendas.Why can’t we have a choice to pay these taxes to an insurance company offering us essentially the same terms as the Social Security Administration, but embodied in a cast iron enforceable legal contract?It can’t be done, because Congress decided to place our contributions in the general fund and use it to fight wars, and for other dubious causes. If the contributions were places in a separate Trust Fund and invested in the same way that an insurance company would have done, the Administration would not be looking at an unfunded liability of $93.503 trillion. Congress decided that contributions from current taxpayers are more than sufficient to fund the payments that need to be made to current retirees. Hence, there was and is no need to set funds aside. In the private sector, this type of arrangement is called a Ponzi scheme and is wholly illegal… and unsustainable.

4 thoughts on “An Honest Tax Analysis of a W2”